On Friday, I took the day off to play with my daughter, Mary.

We all need a play date every now and then. This one centered around my editor’s invitation to go to a Giants game with her and her 11 year old son, who’s only days older than Mary, while they were on vacation out here in the Far West.

In fact, considering that I write nearly every day, taking a full day off is rare, and getting a day with just one of the kids is even rarer. I think Mary had a lot of fun … she was singing the SpongeBob song, “It’s the Best Day Ever” half the night …

We left the house at 9:30 and took the 11:30 ferry from Vallejo to San Francisco. I dislike driving into the city, and I HATE driving home because getting out of the city after a game is next to impossible. Fortunately, the ferry picks riders up at AT&T Park and delivers them in Vallejo, where the parking garage is only $5 for the day and right across the street. Sure, the ferry tickets aren’t cheap, but they’re cheaper than San Francisco parking and the gas it takes to get there, not to mention the headache of driving in the city. 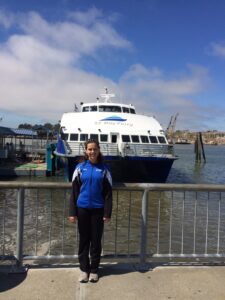 Mary’s first boat ride. Ferry to San Francisco. It was a beautiful day!

The first order of business was walking through the Marketplace where I resisted buying anything … seriously. I was good. Though this fresh sourdough bread was calling my name … 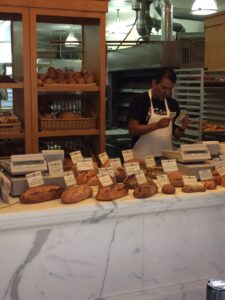 Nothing better than San Francisco sourdough bread! Next time …

We were hungry, but it was the lunch hour, so we walked about a mile and a half (two miles?) to Pier 39. I forgot how CROWDED the wharf area is in summer … tourists. Having grown up only a few miles from the city, I went there all the time, and never remembered THIS many people :/

We found a place that looked pretty good with food we both liked. 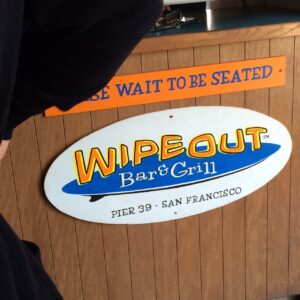 We split garlic fries (wow. Just wow) and Mary got a cheeseburger and I had a salad. Because of those garlic fries, you know … sort of trying to be half good! 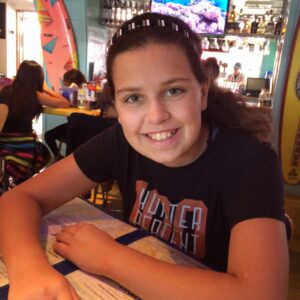 Mary in her “100 Hunter Percent” shirt. Giants fans will appreciate 🙂

We walked around Pier 39 a bit, but it was REALLY overcrowded and just not fun. So we bought (overpriced) tickets to the Aquarium of the Bay. It was a nice place, clean, pretty cool … just small for what the cost was. IMO. 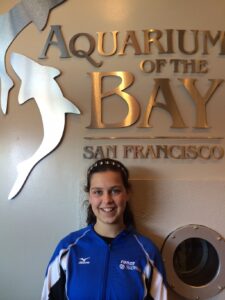 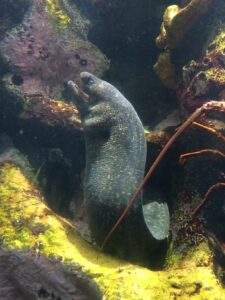 Didn’t this space creature attempted to swallow the Millennium Falcon??? 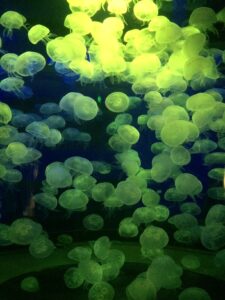 This are jelly fish. They had a display with babies, these “juveniles”, then large jellies. This display was under a black light and the fish changed color from the light … green … purple … blue … pink … sort of creepy and pretty at the same time! 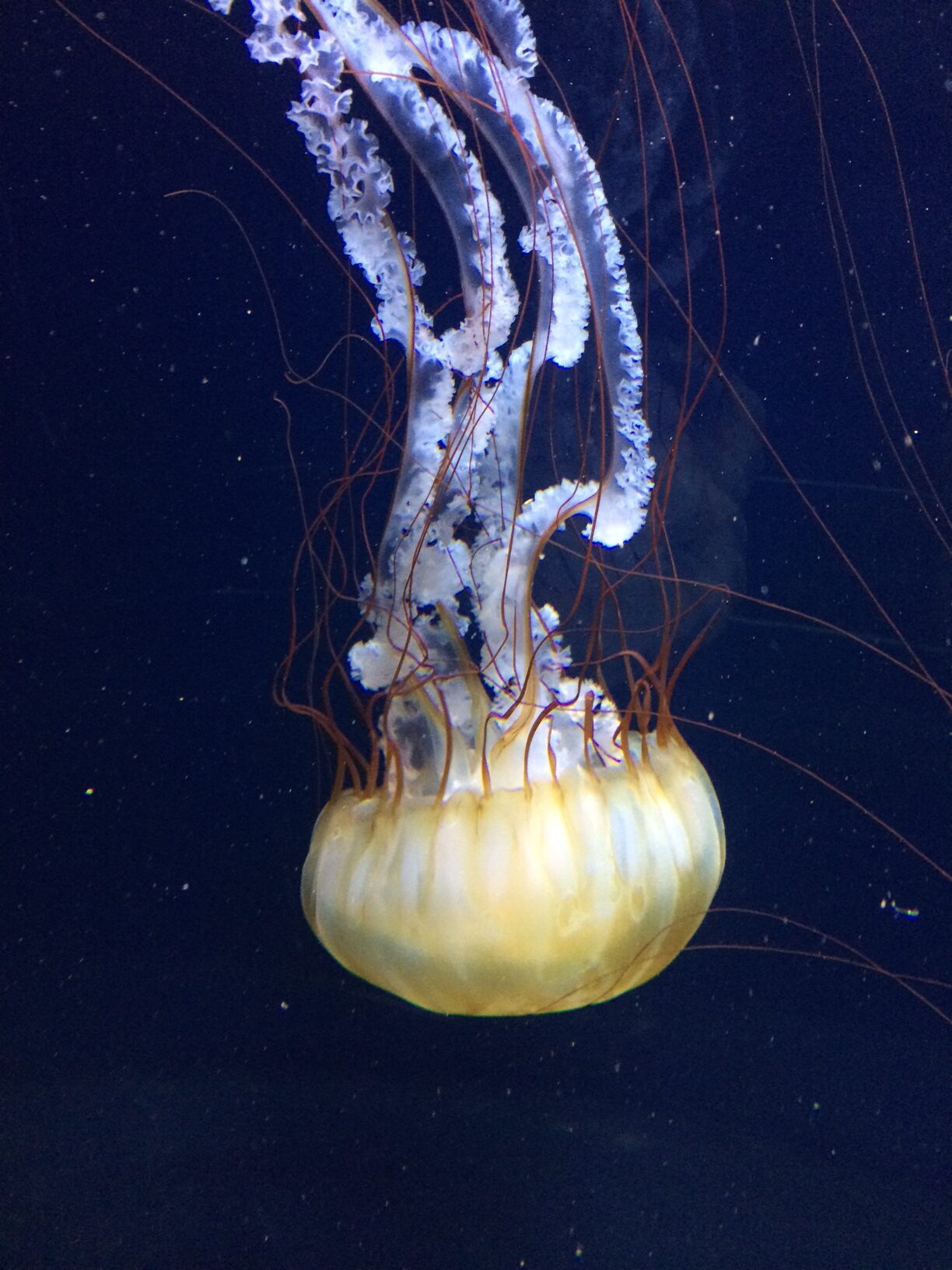 The next section had us walking “under” or “through” the ocean bottom. It gave both Mary and I both a headache from the concave glass and the movement of the fish, but we saw a good friend: 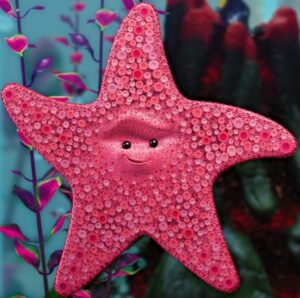 Whoops, I meant this friend … 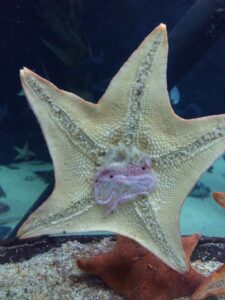 And then Mary posed with the big fish … 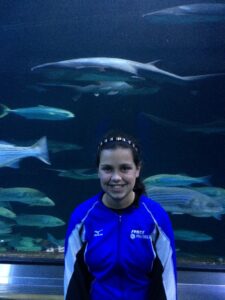 Yes, that’s a shark. It didn’t eat anything while we were there …

I couldn’t get a good shot of the river otter playing with a rock — he kept putting this rock on his head, then swimming, and when it fell off, he’d retrieve it and keep going. He was hilarious. We dragged our feet, and the aquarium took MAYBE 35-40 minutes to go through. Largely because we watched the otter for about ten … 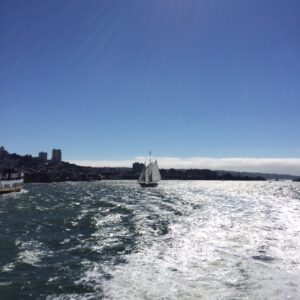 Truly, a gorgeous day on the Bay.

Of course, I had to take a selfie on the pier … 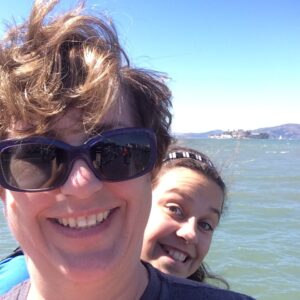 Mary photobombed me as I was attempting a selfie with Alcatraz in the background.

We walked around a bit more, but we were tired, so caught the ferry from Pier 41 back to the main ferry building, then walked a mile and a half to AT&T Park (after fueling up on Starbucks. Well, I had Starbucks, Mary had water.) 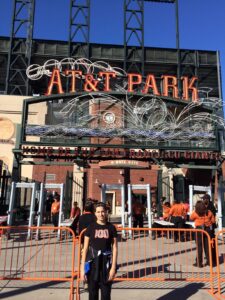 We made it! Mary’s first Giants game. They lost Friday night in what was a good game until three of our players all made stupid base running moves … but then we won two fabulous games on Saturday and Sunday. The season certainly isn’t over!

We had an amazing view inside the stadium — truly one of the BEST baseball parks in the country. 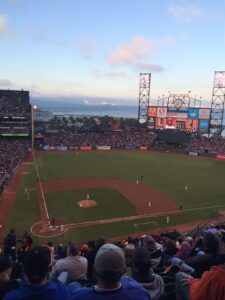 Just have to say again … an absolutely beautiful day!

And one last selfie in the stands … 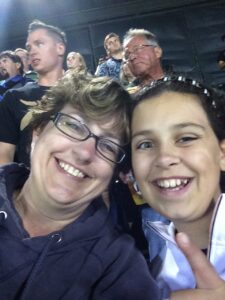 We were tired, but having LOTS of fun! Thanks Kelley for the company and the game!

Now, I have to play catch up. I’ve been writing this weekend, but not as much as I should have been — and Sunday ended up being a “catch up on emails/blogs/interviews” day so I didn’t actually write anything new. Not to mention church, the first day of Catechism for the kids, catching practice for Mary (she’s playing Winter Ball softball), and watching TV with the kids.

But I’m REALLY looking forward to diving into COMPULSION copyedits!

What did you do on your last “play day?”