Calgon, Take Me Away!

It’s been that kind of month.

My youngest is in baseball (his first year) and my youngest daughter is in softball (her first year) but before we signed her up for softball, we signed up for a soccer league — just six Saturdays, no practices, 4 on 4. Great practice for passing, dribbling, and scoring (in much smaller goals, no goalie) … but it started THIS weekend. The same weekend as a two-day softball tournament. Not to mention that my middle schooler is going on a week-long spiritual retreat with the entire middle school (which I had to buy stuff and help him pack for), and my high schooler Kelly is in the school musical as one of the leads … the Wicked Witch in the Wizard of Oz. (And my other daughter is a munchkin!) Kelly also has two AP tests coming up in early May and then finals … Add to that my oldest, a college student, has finals and sent me her essay Sunday night to proofread before she turns it in.

This would be overwhelming even if I didn’t have a tight deadline. But, yes, I have a deadline. Nine days to finish COLD SNAP, book 7 of the Lucy Kincaid series.

But this is par for the course in the Brennan house, just not usually all at once. Husband did three of the four softball games this weekend, plus baseball pictures. But he really earned his keep these last two weeks by building the 10-foot OZ head for the musical. Kelly designed it, and he cut out the thick insulating Styrofoam. Then, Kelly painted it with air brushes — a medium she hasn’t worked with before. Between the two of them (and a lot of late nights) they created an amazing prop for the show, which will have smoke coming from the eyes and mouth and be held on stage by six dancers. Whew! 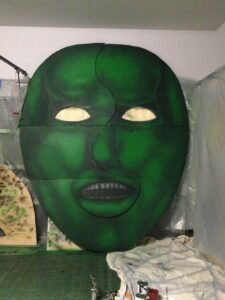 Isn’t it amazing? Yeah, I’m bragging, but I’m proud of both of them. Kelly also had one of her pieces of art selected to be shown at the California State Fair. They juried nearly 2,000 pieces from high school students around the state, but only 500 will be shown and judged. So if you go to the State Fair this summer, you’ll have to definitely check out the art exhibits! (I always do because the buildings are air conditioned, and the State Fair always seems to fall during the hottest weeks of the summer …)

But it’s times like these where I begin to panic. It’s as if everything is happening at once … yet, by the time I turn in my book, play rehearsals will be over and they’ll have opening night; my oldest will be home from college; and it’ll start the last week of both softball and baseball. (But I won’t get much reprieve because after opening weekend, I’ll be receiving copyedits for the first Maxine Revere book!)

There are a couple things I do to help when I’m pulled in a million different directions at once. One is having a margarita 🙂 Or playing a video game. Video games are rather mindless and I can veg for 20 or 30 minutes and not think … But my favorite is taking a bath. A bubble bath is one of my favorite solitary activities which, when I had kids, I had to cut back on. It’s very hard being a mom and expecting privacy for two minutes sitting on the toilet, let alone an hour in the bath!

When I do indulge, I have candles, wine, cheese and crackers, and a book. Always a book. In fact, my favorite place to read is in a hot bath!

What do you do when you need to run away from it all … but can’t?