I just saw the newly redesigned Murder She Writes site — it’s clean, sleek, and I love it. I can’t wait to launch it … but it won’t be until next week.

But I have a FANTASTIC guest coming tomorrow, Julie Kramer, so you definitely want to visit!

Fall and winter are always great movie seasons. I have yet to see SAVING MR BANKS and THE HOBBIT, but both of them are on my to-see list in the coming week or two. However, I was completely thrilled with the last two movies I saw. 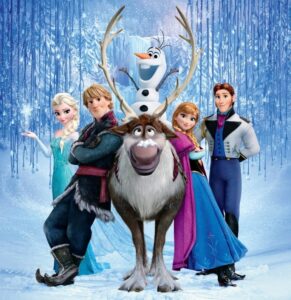 FROZEN is a Disney movie in the best tradition of Disney. Fantastic music, a compelling story, strong character arcs, two fantastic female characters, and a noble hero who prefers reindeer to people. Even the villain is believable and not over-the-top, with his own character arc. I love heroes who don’t think they’re heroes, but they are anyway. And a hero who loves animals? Sign me up! But even better, the heroine of the movie is the true hero, and she didn’t need the hero to save her … she needed him to show her the true meaning of love and sacrifice.

I was skeptical of AMERICAN HUSTLE because I thought it would either be outstanding or horrid. But because of the star-studded cast — actors and actresses who are truly star quality — I had to see it. Wow. I was NOT disappointed. It was a slice of history, funny and based on the truth of the era. I was a kid in the 70s, but even I remember the paneled walls and the horrid wallpaper that clashed with the thick orange carpets. There wasn’t one bad actor among them–even though no one was completely good (or completely bad), and you shouldn’t like a guy who cheats on his wife, you can’t help but like Irving (Christian Bale) and Sydney (his mistress, Amy Adams) and Rosalyn (his wife, Jennifer Lawrence.) Even Bradley Cooper’s wild character, and Jeremy Renner’s politician — This is the best ensemble cast I’ve seen in a long, long time. Even though the movie is over 2 hours, it didn’t feel too long. I see many Academy Award nominations here, and probably a few wins, too.

What movie blew you away this year? What movie are you aching to see?