It takes courage to try anything new. The fear of failure, the fear of change, the fear that if you show part of your true self to a stranger that they’ll stomp all over you.

I know many writers who fear sending their work into the world. They fear rejection, they fear success, they fear criticism. They fear a lot — and let their work sit on their computer or under their bed and keep writing and keep filing until they’re so full of fear they’ll never share their writing.

It’s not just writers seeking an agent, an editor, or a reader. Anyone who attempts something new, different, original faces rejection, failure, and hardship. Trying out for the high school varsity team only to be cut down to JV while a younger student gets the slot you thought was yours. Growing a garden only to have the rabbits eat everything. Applying for a new job when you’ve been out of the work force for three years, or when you lost your job and are now competing with 100 people who have more education or more experience than you. Or worse–competing with people who don’t have your experience, but you’re all now on the same playing field.

But you also face achieving your dreams. You risk rejection to attain your goals, to fulfill and satisfy you. Courage is to not only dreaming, but putting your dreams into action.

This came clear to me when my daughter, Kelly, and I went to National Portfolio Day two weeks ago in San Francisco. National Portfolio Day is where high school sophomores and juniors bring their art portfolios to a local college (some kids traveling several hours since there’s usually only one per state, and two in California) — physically, digitally, however they can — and show their creations to admissions counselors and graduates from art schools all over the country. They wait in line, wanting feedback but hoping for praise, for a word or more than tells them they have what it takes to get into the art school of their choice. 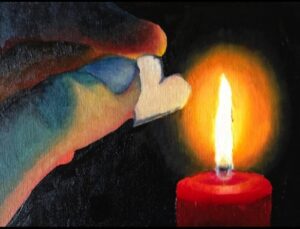 Imagine, being 16, standing in front of a seasoned veteran who graduated from the school you want to go to, while he looks at your work and gives you an honest assessment. What’s working for him, what’s not. What are your strengths, and what are your weaknesses.

That takes courage. More courage than any writer sending out an email query to an agent in hope of getting a read. More courage than sending your manuscript to a contest and being judged by your peers. Because it’s you, your art, and your critic, all there in a room … and you’re also being compared to hundreds of other students who also want what you want, competing for limited slots at the best art schools in the country.

I found the experience amazing, and so did Kelly — even though she went to it with a bit of trepidation. There are a lot of talented kids out there creating art using all mediums. Fine art, digital art, animation. Kelly specializes in fine art — preferring pencils, charcoal, or oil paints — and her skill and technique, especially for someone who is self-taught, is far and above most of her peers. Except, of course, when you attend an art event that draws in crowds of kids who are also far and above most of their peers. 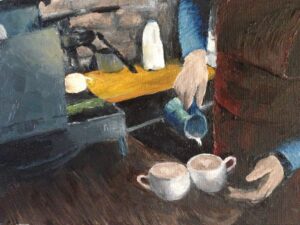 The admissions counselors from the colleges were helpful in both assessing her portfolio and giving her practical advice on how to create a stronger presentation for when she applies. We only spoke to 5 colleges during the four hours we were there because of not only waiting in line, but getting the detailed assessments. One college counselor spent more than 20 minutes on Kelly’s portfolio and “selling” us on his college. He did a fantastic job, because now The School of the Museum of Fine Arts in Boston is one of her top choices. They’re associated with Tufts and is one of only three colleges that is also a museum.

She also started thinking about what she wanted and didn’t want out of an art college. Being able to take a core curriculum of History and English and other classes over and above her Fine Arts classes is important to her, so now she’s also looking at dual degree programs. She also likes the colleges where you get a BFA and don’t have to declare a major. One of her previous top choices moved down on the list because they require their students to declare a major by the second semester of their freshman year. 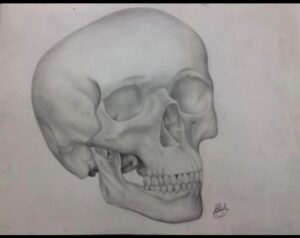 What might have happened if Kelly didn’t have the courage to stand with her art and show it to the people who will, ultimately, decide her fate? Would she have hidden her paintings and drawings in her room out of fear she’d be rejected? Settle for a college program she didn’t love because she feared exposing her heart and creativity to the public? I’m so proud of her, not just her talent, which I had nothing to do with, but because she faced her fear and now is in a much better position for it.

She may not get into her first choice, once she decides what her first choice is. But that doesn’t mean she’ll quit. And if an introverted 16 year old can muster the courage to expose her art to potential criticism, so can you.

What are you going to do to face your fears? Big or small, it doesn’t matter — for some people, leaving the house takes courage.