My publisher cancelled this supernatural thriller series more than four years ago. I was heartbroken and never planned on writing another book, even though I loved the characters. There were a lot of reasons it was cancelled, but it boiled down to low sales: too many of my readers didn’t cross-over to a shift in genre. They read my because of my crime thrillers, and weren’t going to be satisfied by demons and ghosts in their stories.

But I love this series. And there were enough readers who loved it to–I’ve had more email about these books than any of my other books. So I wrote MORTAL SIN on and off for four years, and finally finished it this summer. I’m indie publishing it, along with a connected novella “Ghostly Justice” that hasn’t been available for sale for nearly two years. 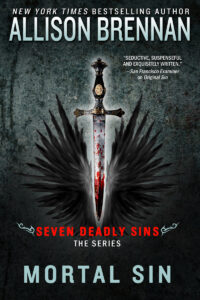 These books are available for pre-order on Amazon Kindle and Kobo; they’ll be up shortly on iTunes. You can keep up to date on where they’re available through my website here.

MORTAL SIN (11.10.14)
Four months ago, a black magic coven summoned the Seven Deadly Sins from hell then quickly lost control. Former witch Moira O’Donnell and her lover, ex-seminarian Rafe Cooper, captured two of the demons, but the remaining five Sins disappeared. Now, whoever gets near the demons becomes infected with an insidious urge to act out on their deadliest sin—with horrific results.

Moira will do anything to find and imprison the remaining demons. Unfortunately, there’s no rulebook to follow, only her gut instincts … and they’re telling her something is very wrong in Santa Louisa, the small California town where the demons were first released. Fights are breaking out day and night, friends are turning on friends, and the jails are full. She wants to stay and help Sheriff Skye McPherson find the cause of the violence, but when a demon hunter goes missing while pursuing one of the Seven, Moira’s the only one who can find him.

While Moira is tracking one demon in Canada, Rafe and Skye battle another in Santa Louisa. With every victory comes many more defeats, and Moira quickly realizes that someone—or something—doesn’t want her to return to Santa Louisa. The body count rises, demonic hot spots pop up throughout the world, and the people closest to Moira are in the most danger. When one of their own succumbs to one of the Sins, Moira fears they’re too late … and the end of the world is already here.

GHOSTLY JUSTICE: A NOVELLA (10.27.14)
LAPD Detective Grant Nelson made a promise to his dying girlfriend that he would find out what happened to a Jane Doe who’s been in the morgue for months. Grant is a cop first, last and always – but what he’s recently witnessed makes him realize there are forces he doesn’t understand and can’t possibly fight alone.

The unusual aspects of the case force him to bring in supernatural experts Moira O’Donnell and Rafe Cooper. Two puncture marks in the victim’s neck confirm she’d been bitten by a human with incisor implants, but the large-bore needle mark in her side prove that someone intentionally drained her blood.

Moira doesn’t want to get involved because she doesn’t think the case is related to anything supernatural, but after Rafe communicates with the ghost, he insists that dark magic was involved in her murder. Reluctantly, Moira agrees to help and together, the three of them uncover a violent, vampiric subculture that has no intention of stopping with only one human sacrifice. Because with each death they become stronger, and the threat of hell on earth becomes all too real.

So what do you think about the covers? Like them as much as I do?