Can you be too old for dreams?

My two oldest daughters are both going through a bit of turmoil because they don’t know what they want to do with their lives. Katie (18) is in college knows what she doesn’t want to do, and has a few ideas about what she might want to do. She’s in the process of changing her major. Kelly (16) wants to do a whole bunch of things, many focused around learning in college. She wants to narrow it down, but the more she learns the more she wants to learn.

I told them both, don’t stress about it. College is the opportunity to try new things, take different classes, and learn what you like and don’t like. But the most important thing is to find a job that fulfills you first and foremost. And if that isn’t possible, find a job that enables you to do things that you want. I have many friends who take low-stress or low-pay jobs just to make ends meet so they have the time to write.

Growing up, I always wanted to be a writer. Even when I wanted to be a teacher or a forensic pathologist or a journalist, I wanted to write stories. Everything I started was a mystery at its core, largely because I loved reading mysteries. Trixie Belden, Nancy Drew, Agatha Christie — I’d devoured them all before I was 11.

I ended up dropping out of college and working in the California State Legislature for a bunch of years, but through it all I wrote.

It is true. I was addicted to All My Children (which first aired when my mom was pregnant with me) and General Hospital (remember the song by the Afternoon Delights–it was a one-hit wonder–“It started out in Port Charles Town, where Frank Smith’s mom used to hang around, no one could prove that he was a crook, until Luke stole his little black book.” Well, I used to type it to practice my typing in 6th grade!)

I thought nothing would be better than to be a staff writer for a soap. The pacing, the stories, always laying on more and more conflict and wild situations … 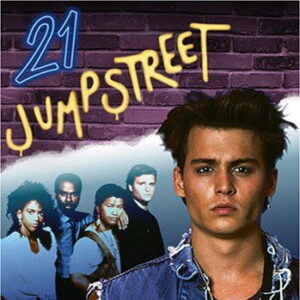 Later, I wanted to write for some of my favorite shows. A few in particular. First there was Code Red, a short-lived fire station drama starring Lorne Greene. I so much wanted to write for that show. I was like 12 at the time … then 21 Jump Street — remember that? Johnny Depp, Peter DeLuise, undercover cops at high schools …. loved that show when I was 18 and kept coming up with storylines and I’d start to write a script, but never finished anything. (This bad habit carried into all my fiction writing, until I was 30.) After 21 Jump Street, I wanted to write for the X-Files, which gave me both supernatural and cop drama.

Obviously, I never seriously pursued that path. I’d like to think if I was serious, I would have done it. But since I’ve been published, I’ve thought a lot more about writing for television or writing a screenplay. Sort of in the back of my head, a little itch that is never satisfied. When the television show CASTLE began, I was enthralled (what crime writer wouldn’t like a perpetual ride along with a hot NYPD detective?) and started thinking about writing for television … again. But it never went anywhere. How would I have the time?

Then I saw a tweet from @CastleArtDept about their art director/production manager (I don’t know his title) but I clicked through to his webpage just to send off to my artistic daughter Kelly so she could see that her love of art can have practical and paying opportunities. (How cool to be the art director for a major television show like castle??)

Ever since the tweet, I got to thinking about writing for television again. What shows I have ideas for (JUSTIFIED, SUPERNATURAL, GRIMM) and what shows I surprisingly have no ideas for (NCIS, SVU, BONES.) You’d think, considering what I write, that I’d want to write for a crime show. But maybe because the other shows are different, I like the challenge. Or, maybe because the first three have an extensive running storyline (like soap operas!) while the latter three are more stand alone episodes. Hmm, that might be it.

I’m filing this dream away for the time being, because between the kids and my deadlines and trying to develop a new series, I honestly don’t have the time to explore the fast-paced world of television script writing. But I don’t think it’s too old to have a dream, and some day, some way, I will do it. Maybe it won’t be for television. Maybe I’ll freak out my agent and turn in a movie script some day. You never know … I actually have a few ideas …

Do you have a dream that you’ve shelved, but know that some day you’ll pull it out again?