I have a confession.

I love television more than the movies.

I never knew why until I started writing this blog tonight and realized that I also love reading a book series more than a stand alone.

Sure, on occasion there is an amazing movie that transcends the plethora of so-so productions. THE DEPARTED, for example. Or INCEPTION. Or CASABLANCA, NORTH BY NORTHWEST, THE SHAWSHANK REDEMPTION, and THE SIXTH SENSE. But more often than note, the movie is “good” but rarely “great.” (Had THE MATRIX or PIRATES OF THE CARIBBEAN ended after the first spectacular movie, I would have included them in outstanding feature films.)

There have been many great films produced throughout the years, but when you have one stand alone movie that’s it. It’s over. It has to be amazing, awesome, want-to-see-again thrills. The same thing goes for books. There are many great stand alone books that I count among my favorites: THE STAND by Stephen King; REBECCA by Daphne du Maurier; WELCOME TO TEMPTATION by Jennifer Crusie; and several of Nora Roberts big summer stand alones. (My mom just finished CHASING FIRE and thought it’s one of her best to date–how DOES that woman keep getting better after so many books? Amazing.)

But as I was glancing at my shelves of keepers, trying to find stand alone titles that are my faves, I realized that most of my favorites are because of a character in a series. Robert Crais’s Joe Pike. Michael Connelly’s Mickey Haller. J.D. Robb’s Eve and Roarke. Lee Child’s Jack Reacher. Tess Gerritsen’s Rizzoli & Isles. Lisa Gardner’s D.D. Warren (and of course Quinn and Rainey!). My shelves are full of series. Karin Slaughter. Ridley Pearson. Even my favorite of Dean Koontz’s books are part of a series– the Odd Thomas books.

You might say most romances are stand-alones, and in one sense they are–the reader follows one couple who has an HEA by the end of the book. But even in romance, writers tap into the human need of connection–writing trilogies or connected series with recurring characters. We (the readers) don’t want to let them go. I get more email about what’s going to happen with Patrick Kincaid, a recurring character who hasn’t had his own book than I do with simple, “When’s your next book coming out?” Our own Rocki has created two amazing worlds with first her Bulletcatcher series, and now her Guardian Angelinos. Different heroes and heroines in each stories, but within the same world so you can follow them over multiple books.

Maybe it’s just me, I don’t know. But I equate my love of series characters with my preference of television to the movies.

With t.v., the viewer doesn’t have to have a complete “story” in the macro sense. Yes, we need a resolution to the immediate one-hour situation, but we know we’ll be visiting the characters again next week. We look forward to finding out what’s happening, even against the backdrop of whatever genre we’re watching.

Some television shows have limited character growth. Most of the crime shows are limited in this scope. Though I love LAW & ORDER: SVU and over umpteen seasons Olivia Benson and Elliot Stabler have grown as characters, but the show is primarily about the one hour story, not the characters who populate it. In this regard, it’s the one exception in my television preferences. I’ve given up on CSI and CRIMINAL MINDS and many other shows because there was little to no character growth–or if there was, it was a sudden change necessitated by a cool plot in one or two shows.

When I first seriously started writing, I had three kids and worked full-time. The only way I could make the time to write was to give up television. I did–for three years. Television had become a habit, because there was a lot of crap on. The early 21st century hadn’t yet seen the explosive growth of cable television series. The good shows (like DEADWOOD) were on paid television, which I didn’t subscribe to. I found that series on DVD. Or they weren’t promoted or supported (like FIREFLY) which I discovered only after I saw the movie SERENITY.

When I started watching television again, I did it first by watching a complete season on DVD. I’d missed a lot in giving up the tube for three years, that I needed to catch up on what was popular. I watched VERONICA MARS on DVD with my teenage daughters and LOST and DEADWOOD with my husband. I fell in love with television all over again, but on my terms.

When I got my Apple TV and started downloading seasons from iTunes, I realized there was still a lot of crap out there — but cable was coming into its own. I discovered LIFE (thanks Toni!) which unfortunately was cut short to only two seasons by short-sighted television executives who didn’t know a good thing–oh, wait, LIFE was NBC. Network. No duh, they were making a lot of crap, no wonder they didn’t see a good thing! And JUSTIFIED (FX), SUPERNATURAL (W/B) and now THE KILLING (AMC). And more.

You can’t have a solid series, even with great characters, even with Timothy Olyphant, without the backbone of a good story.

Nothing stood out more clearly to me than the blend of story and character than when I saw LUTHER.

“With the tormented Luther, it’s sometimes tough even to identify who is the cat and who is the mouse. Writing and acting come together to produce characters, more than stories, who are powerful, surprising, ambiguous, and all that other stuff.”

While I disagree that it is the character MORE than the story, I think that because the characters were so real that they BECAME the story. It was seamless.

LUTHER is a BBC show that I would never have discovered if not for my cousin Ginny mentioning it when I was visiting her and my great-aunt. So thank you Ginny!

LUTHER best illustrates my point because it is a limited mini-series. Six episodes (though I read they are producing two two-hour episodes for later this year) that have a complete story arc within the episode, and a continuing (and complete) story arc over the six-episode season.

“This bold British import is among the best TV I’ve seen in a mediocre (on network TV, anyway) fall season. Fast-paced, constantly surprising and darkly entertaining, Luther is about as far as you can get from a cookie-cutter procedural.”

I wouldn’t say that LUTHER is better than JUSTIFIED … it’s different. I went into the series knowing it would end in six episodes (it was only later I discovered the two future shows.) It hooked me from the beginning, when Luther is chasing a child predator who had molested and killed many young girls. He’d left one of his victims in a box and she would die if Luther couldn’t get the bastard to talk. Luther chases him and the killer falls and is hanging precariously off the edge of a catwalk. Luther stands over him and demands to know where the girl is. He knows that the killer will not tell him if he’s safe, so he lets him hang. And keeps him hanging until he knows the girl has been found and is alive.

And keeps him hanging a beat longer. Another beat. 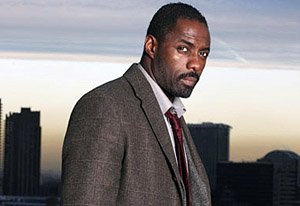 LUTHER isn’t perfect, but it doesn’t have to be. What it must do, and does better than most shows I’ve seen, is draw the viewer into the lives of not only the main character but the people who surround him. Alice Morgan, the brilliant sociopath who John Luther knows killed her parents but can’t prove it, is the mouse to his cat . . . or is it the other way around? (Honestly, she is better than Hannibal Lechter. Just as smart, but subtle.) And Luther’s estranged wife (no, I didn’t like her any more than I like Winona in JUSTIFIED) was perfectly played (for a weak-willed don’t-know-what-I-want female who did, fortunately, redeem herself in the end.) His partner Justin Ripley, a rookie I adored–young, idealistic, with a conscience that both supported Luther and criticized him when warranted. He played by the rules, but at the same time believed in his senior partner. And Ian Reed, Luther’s best friend and staunchest supporter and . . . more. I don’t want to give anything away.

And while Idris Elba as John Luther was the core of the show, it only worked because everyone rose to the challenge. The writing was sharp, the acting top-notch, the stories psychologically terrifying and interesting, and the character development deep and real.

Perfect? No. But without watching it again, I wouldn’t be able to point to the flaws. As an American, some of the British rules were a bit different. Cops don’t all carry guns, for example. And sometimes they talked so fast that, with their accents, I couldn’t quite understand everything they said. But I got the gist, and didn’t need sub-titles 🙂

Writers, mark this down as the next series you watch. Less than six hours of time, it’s worth it. Crime show fans? Mark this down as a thrill ride with great characters you won’t want to end.

After watching LUTHER, I knew exactly why I preferred series to stand-alones, and television to movies. Character depth and growth against the backdrop of a great story.

It just doesn’t get any better than that.

So tell me — what television series stood out so much that it reignited your love of t.v.? What book series is a must read as soon as the book comes out?

As an aside . . . this weekend we’re starting a new hopefully monthly feature of guest bloggers. So come visit us on Saturday and say hi to my friend Misa Ramirez!