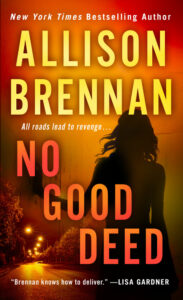 NO GOOD DEED, the tenth book in the Lucy Kincaid/Sean Rogan romantic thriller series, is out today … I hope you enjoy it!

I love this book. I shouldn’t say that because I don’t want to jinx sales, but this is my favorite to date. A few reasons: though it’s the longest Lucy/Sean book (128K words), it’s the fastest paced. It’s a race against time (which I love in books and movies) to find former DEA Agent Nicole Rollins who escapes in the first chapter. When I was writing it I didn’t realize how long it was … it didn’t feel long to me. But my initial draft was even longer … I trimmed 🙂

I also love it because both Kane Rogan and Jack Kincaid have important roles, but particularly Kane. His future love interest is introduced. (The next two Lucy books will feature Kane and Siobhan prominently … I don’t know how long it’ll take for Kane to come around, so don’t hold your breath.) I loved putting Kane and Sean on the page together … they have a backstory that I haven’t fully explored yet, but there’s a trust between them that isn’t there with Sean and Duke. Why? I’m not quite sure yet … but there are hints.

Lucy is in a really good place emotionally. It took her a long time to get to this point, but she earned it. 18 months have passed since Sean came into her life, and even with all the violence in NO GOOD DEED, Lucy’s inner balance has been restored. As she says, she’ll never be normal, but she’s okay with that.

And … I brought in Hans Vigo. He’s still struggling with some physical health issues (after STALKED) but it was really good to revisit him. Noah Armstrong has an appearance as well … and hint, hint, hint …. Noah will be a major character in Lucy #11. Can’t tell you why yet, but it’s completely organic to the story arc for these characters.

My mom read NO GOOD DEED (she’s my mom, she gets an early copy.) She thought it was more violent than my other books, but I don’t think so … certainly no more violent than SUDDEN DEATH. A lot of people die early on, but Nicole escaped from custody … people had to die for it to work. And she doesn’t have respect for human life, which will become evident as we learn about her backstory.

I love getting into the head of my bad guys, and Nicole is one of the more interesting bad guys I’ve written in awhile, at least to me. When I got into her head, I immediately knew why she did everything she did. It was a huge relief to me because sometimes digging around to find the truth is difficult. This time, it was all right there.

But one of my favorite things about this book is the theme — I never consciously write with a theme in mind. Since all my books are about crime and punishment, right and wrong, good guys and bad guys, I figure justice is the over-arching theme in everything I create. This book was a bit different because it’s so much about family — Nicole’s family compared to Lucy’s family. I didn’t even see the parallels until the end of the book, yet there they were.

Read on for some teasers … or don’t read on and just go get the book!

TEASERS from NO GOOD DEED

She’d had happy times before, but she’d never truly felt happiness, deep down inside. Until now.

It certainly wasn’t only because of the exquisite engagement ring on her finger, or the lazy days at the beach house in San Diego, of the birth of her beautiful, perfect nephew. She, Lucy Kincaid, finally accepted — and liked — who she was.

And then there’s Kane … 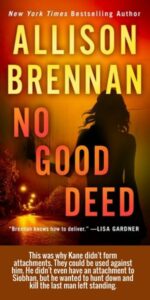 What did you get yourself into, Siobhan?

Why couldn’t Andie’s little sister just stay in the States–didn’t the US have enough problems to photograph? Why come down here? Why risk her life? This wasn’t the first time he’d been sent to bail the photojournalist out of hot water.

Third time’s a charm, sugar. Next time you’re on your own.

Next time? Hell no. He’d get Rick Stockton to flag Siobhan Walsh’s fucking passport to prevent her from ever leaving the United States again. Then she could be Jack Kincaid’s problem instead of his.

Not that lack of a passport would stop the girl from doing whatever she damn well pleased.

FBI Agent Nate Donovan … the only one Sean trusts to watch Lucy’s back when he can’t.

“Zach’s at the hospital now. Ostensibly to give Juan a briefing, but he promised he’d find out what happened.”

“We don’t even know the name–I don’t think they picked one out.” He paused. “I’m not having kids.”

“If I could, I’d have kids,” she said. “The world is a dangerous place, but why else do what we do if not to make it better? If not to raise good kids in a troubled world?”

He shrugged. “I wouldn’t make a good dad.”

Lucy didn’t see it. Then she looked at Nate again, assessing him impartially. It was there, that edginess that both Kane and Jack had. The eyes that had seen evil, the hands that had killed, the soul that had mourned. Nate might have the happy-go-lucky exterior when he relaxed, he might be able to enjoy playing video games all night with Sean or laughing over beers in the kitchen, but she suspected that was just it, an exterior. A remnant of who he was before he became a soldier.

And of course Sean … there is still so much I’m learning about him!

They had a two-mile trek down into the canyon. Sean had never truly feared for his life before. He’d been in harrowing situations. He’d flown under fire for Kane. He’d fallen down a mine shaft and hadn’t known if anyone would find him. He’d been shot at, barely escaped a forest fire, and once long ago had nearly died in the plane crash that claimed the lives of his parents.

He’d taken his life in his hands many times. He loved street racing and had crashed twice, once resulting in a broken leg. He’d been fifteen and legally not allowed to drive. He’d been reckless in his youth, not only with his plane and cars and speedboats, but in putting himself into dangerous situations. Maybe he’d had a death wish for a while after his parents died. He’d gotten out of the crash with minor injuries; his parents were dead. He’d buried their bodies. He never talked about it. He hadn’t even told Lucy everything. He really didn’t want to dig too deep in his psyche.

That was sixteen years ago, more than half his life, and now he had so much more to live for. He wasn’t going to hurt Lucy by getting himself killed.

And good news! There will be two more Lucy Kincaid/Sean Rogan thrillers coming at the end of 2016/early 2017. Sean, Lucy, Kane, Siobhan, Noah, and more …

To order NO GOOD DEED, visit my website for online links, or find the book at a bookstore near you!