I haven’t been blogging much because I’ve been out of town on and off ever since Left Coast Crime in Monterey. And when I’ve been home, I’ve been writing and playing with the kids because they’ve missed me.

So my plan to blog twice a week with one guest has failed. Hoping that I’ll pick it up again in the coming month!

First, I think it’s important to explain that book tours are not primarily about selling books, though that is certainly a component. Book tours have two primary purposes: 1) Meeting and developing relationships with established book sellers so that they will hand-sell your book as well as support you now and in the future. 2) Meeting readers, particularly established readers and making a personal connection with people who know and love your books.

There is the added benefit that by speaking to bookstores and libraries you’ll also grow your audience, but that isn’t your primary focus. The personal connection is the focus.

I’ve had a good turn-out — for me! — at most of my signings. My launch was successful with over 50 people in a very small book store, so that was a lot of fun. And the other signings I’ve had 20-25 people in attendance, until last night which was much smaller. Yet … at the smallest turnout, the store had the biggest number of on-line orders (people who couldn’t make the event, but wanted a signed book.) So it was worth adding a day to my trip to Arizona for the Desert Dreams conference. 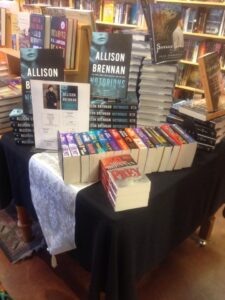 Book display at The Poisoned Pen in Scottsdale.

There are things I will do differently next time.

1) I’m going to make available through one bookstore inscribed, signed books for pre-order. I’m planning this in advance and will make a special trip to sign books prior to the release date, but to me this is a plus for both me and my readers.

2) I’m going to reach out to libraries and schools in the communities where I’m signing to speak to readers and aspiring writers. I love speaking to high schools and I think this would be a great way to give back to communities where sometimes the arts aren’t as strongly encouraged. It’s also short-sighted to spend money on travel and only do one or two signings in an area — I want to get the most bang for my buck (or my publisher’s buck!) and do a little bit more in each place.

3) I’m going to do a better job with media communication. The Sacramento Bee feature that my hometown paper ran brought people to my signing, plus I’ve received a lot of comments and emails about it. I’ve had more requests to speak to local groups in the last two weeks than in the last two years, so I know it’s been hugely effective. Getting these features aren’t always possible, but it’s an area I’ve never really explored. Not just newspapers, but radio.

4) Not have a book deadline at the same time I’m traveling.

I also recognize that because I write 3 books a year and have 5 kids, I can’t do as much as other authors. That’s okay — I went to six bookstores and that worked well. I think I could do eight comfortably, so that’s my goal when the next Max book comes out. Maybe more — if there’s a demand.

I also recognize that when more than half my books are sold as ebooks, many of my readers don’t shop at traditional bookstores. While I prefer print books, many other readers have moved over to ebook only … or a mix of both. I want to find a way to do something with those readers, such as an on-line chat, maybe a “digital book club” kind of chat where people can ask questions about the book and I can speak. Skype or a chat room might be the way to go there.

SO I’m now in Arizona for the Desert Dreams conference. I’ll be speaking about villains tomorrow in my workshop, plus have a Q&A with three other fantastic authors — Jennifer Ashley, Sylvia Day and Karin Tabke. Plus, there will be another book signing! My last for NOTORIOUS.

If you would like a signed copy of NOTORIOUS, they are available at:

Now for some good news … NOTORIOUS squeaked onto the USA Today bestseller list at #145. Thank you everyone for your support for my new series. It’s always scary when you write something new and a bit different, and then doubly scary when you have a completely new format and process! But I love Max, and am thrilled that I get to write more Max books. Which … I’m getting back to right this very minute.

P.S. While I was here, I got to see the Giants play at Chase Stadium! There seemed to be more Giants fans in attendance than Diamondbacks fans, LOL. I took my daughter, who goes to college in Phoenix, to the game and we had so much fun. Especially since they won. 🙂 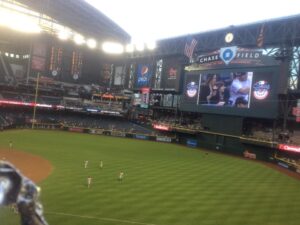 Giants beat the Dbacks on Wednesday 2-0 … and I was there! #Lovebaseball