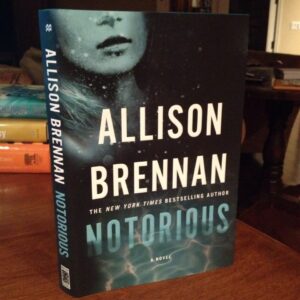 Today is the day I’ve been waiting for since last March, when I first turned in the revised manuscript for NOTORIOUS.

Today is the day I’ve been waiting for since two years ago, when I signed the contract for my first hardcover thriller.

Today is the day I’ve been waiting for since 2006, when my first book THE PREY hit the shelves in mass market paperback, and I dreamed of one day being in hardcover.

NOTORIOUS is my 22nd published novel, though I have #23 already in production and #24 drafted. It amazes me sometimes to think that I’ve write 24 books (28 if you could the four I wrote but never published) plus more than a dozen short stories and novellas. (And then I have a panel at Left Coast Crime with Catherine Coulter who has an amazing 70+ published, and she’s still writing great books!)

I can not tell you how excited and nervous and overjoyed I am right this minute.

I’ve also had some amazing reviews … which is odd for me to have so many BEFORE a book comes out. In mass market original, like my first 21 books, the only review we know we’ll get before publication is RT Book Reviews (I love RT!) and sometimes an occasional pre-pub review in another industry magazine. For NOTORIOUS, it’s been widely reviewed thanks to my publisher widely distributing both physical and e-galleys. In addition to quotes by Sandra Brown, James Rollins, Lisa Gardner, and Andrew Gross (all authors I read and admire!), Booklist gave NOTORIOUS a starred review and said, “…a terrific new series. Sandra Brown and Hank Phillippi Ryan fans will feel right at home.”

It’s been called “A thrilling read”; another blog wrote: “Notorious by Allison Brennan is one action and intrigue packed moment after another as we are introduced to one of the strongest, and smartest female heroines ever!” And DP Lyle said it’s “a fun, fast-paced thriller that will keep up late.”

I’m going on a mini-book tour and I hope to see you there if you’re in the area! You can also contact the stores for a signed copy if you can’t make it. Full details are on my website, but here’s the list of stores and dates:

Now, a sneak peak from chapter 10:

Max pocketed her phone and surveyed the area around her. No bright lights, no sign that anyone was around. There were several magnolia trees to the left, not directly behind what Max believed was the clubhouse, but close enough that if she got high enough, she’d be able to confirm she was right.

Climbing trees was like riding a bike, but unwise to do in heels. She slid out of her two-inch pumps and pulled herself up to the first thick branch. Her heart raced, exhilarated, reminding her of when she first became an investigative reporter. When she didn’t have the obligation of the cable show, when she didn’t have staff who depended on her, when she didn’t have any responsibilities to anyone, only to herself and her drive to learn the truth. She’d been reckless, brash, and free.

She climbed higher than she needed to, mostly because she could and the sensation of height was freeing. The headache that had plagued her since she’d left the Ames house had disappeared and in a moment of clarity, Max saw what she might have been doing had she said no to Ben two years ago. More undercover work. Less responsibilities. More freedom.

Max didn’t like supernatural anything, from movies to television to the plethora of ghost hunters and paranormal activities people claimed to have witnessed. But she’d been drawn to the television show The X-Files because of Fox Mulder’s tagline: “The truth is out there.” She didn’t believe the truth was in outer space or in some military complex doing experiments on aliens, but she did believe that the truth was knowable, that it would set those trapped by lies free.

And from her vantage point halfway up the magnolia tree, Max saw the truth. 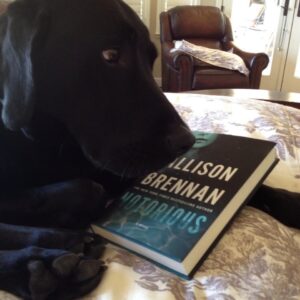 Thank you everyone for being such loyal readers. Without you, I would not — could not — have written this book. I consider myself both blessed and lucky to be able to do what I love every day: write.