The Story Behind the Story

BREAKING POINT is out in two weeks! I’m really excited about this book for several reasons.

1) The cover. I LOVE this cover. It hits all the right spots for me. It’s suspenseful, big, different, and I think it stands out in a sea of other great thriller and suspense covers. 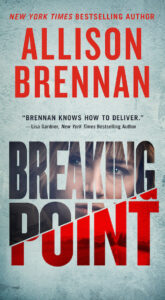 2) I introduce a new character who is one of my favorites … she’s dark, she’s dangerous, she’s different from most of my characters. I love Bella Caruso, and hope you do, too.

3) BREAKING POINT tackles a difficult subject — human trafficking — but through Bella’s eyes, I think you’ll be completely invested in the story.

THE STORY BEHIND THE STORY

BREAKING POINT is not the first story I’ve written about human trafficking — and it won’t be the last. This is a subject I have researched extensively, and a crime I’m passionate about. More, there are so many different stories in the human trafficking world. In FATAL SECRETS I explored underage sex slaves brought against their will into the United States from Central America. In THE LOST GIRLS, I explored forced pregnancies and illegal adoptions from those forced into trafficking. In BREAKING POINT I look at American teenagers — young girls who are sold into prostitution, or runaways trying to survive, only to have their freedom and innocence stolen from them. And sometime in the future, I plan to write about forced labor which encompasses more than half of all real-life human trafficking.

When I first wrote about JT Caruso — one of the principles of Rogan-Caruso-Kincaid Protective Services — I didn’t know much about him. I knew he and Kane were close friends from childhood. I knew he had a sister, but I didn’t know much about her. I knew he had a rough childhood and enlisted in the Navy right after high school. I finally met his sister Bella Caruso at the beginning of BREAKING POINT and she is hands down one of my favorite characters to date. She is dark, dangerous, bold, and a risk-taker. She’s a former cop who doesn’t like the rules, so works for a sketchy organization who rescues underage sex slaves. This allegiance has become a wedge between her and her brother, but when a cop turns up dead and Bella goes missing while under deep cover for a notorious sex trafficking ring, her brother is the first to come to her rescue — and JT knows that Lucy is one of the few people who can find her.

According to the International Labor Organization, sexual exploitation accounts for only 19% of human trafficking cases — yet brings in 66% of the money — nearly $100 billion a year. This is not a crime we can ignore or hope goes away or think it doesn’t happen in the United States. It does.

But I also recognize that most people read fiction to escape—I know I do. I don’t want to be preached to or lectured. Neither do my readers. So I created Bella Caruso. She doesn’t have to tell people that sex trafficking is bad — she’s lived it. And she will do what it takes to save as many girls as she can … or go down fighting.

BREAKING POINT brings in all the big guns in the Lucy Kincaid series because one of their own — Bella Caruso — is missing. Of course Lucy and Sean are front and center along with Bella, but JT, Kane, and Jack are all doing whatever it takes to save the day. In addition, Lucy has to face the consequences of her actions in the past—and her present actions to find Bella—because she has a new boss who doesn’t like anyone who bends the rules.

If you haven’t pre-ordered BREAKING POINT (which will be in stores on January 30th) visit my webpage which has all the important links.