I’ve been a member of International Thriller Writers since almost the beginning of their organization. (In fact, I missed being a charter member by three days! Grr.) Since the first, small conference in Arizona in 2006, I’ve only missed one “Thrillerfest” when it conflicted with RWA. If there’s ever another conflict, I won’t be skipping out on Thrillerfest. 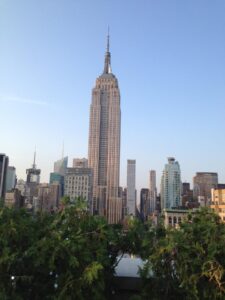 The view of the Empire State Building from the Rooftop of 230 Fifth Street where St. Martin’s had their party on Thursday night.

There are many reasons why I love this conference, not least of which is the thriller/suspense focus. The conference is in New York City and gives me the opportunity to sit down with my editor and agent every year. While meeting in person is not a requirement in publishing, it’s always nice to have that sit down and talk about both business and pleasure. Since I’m 3,000 miles away in California, Thrillerfest provides a rare opportunity for an annual meeting.

I haven’t been to many mystery conferences, Thrillerfest being my only one until I went to Left Coast Crime earlier this year. I am definitely planning on attending Left Coast Crime again (either 2013 or 2014 or both!) and my dream is to go to Bouchercon. Unfortunately, it’s in the Fall and all my kids are in Fall sports, making juggling this conference harder. I think I can swing 2013 because my #2 daughter will have her driver’s license. But Thrillerfest is in the summer, a great travel time for me. 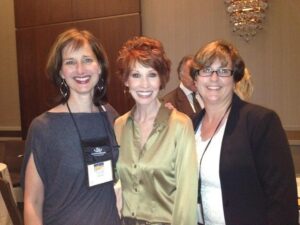 Pamela Callow, Sandra Brown, and me. I need to lose at least 35 pounds.

Another very important reason I love Thrillerfest is the atmosphere. Everyone is truly generous and helpful. The mega-stars hang out with the rising stars, and there isn’t a lot of professional jealousy or secrets or clusters of people in corners giving you the evil eye when you approach. Maybe because the conference is smaller than most national conferences — I think we had 800 attendees this year — we get that sense of intimacy that many conferences lack.

And then the panels! Definitely more in line with my interests than most other conferences. Examples? How about: “How do you knock off your characters? Unique ways to kill,” “Is truth too strange for fiction?” “Is the Apocalypse Imminent?” “Does Evil Exist?” and “What Makes them Scream?” See why I love coming every year? LOL. There are also master classes at “Craftfest” taught by the likes of Lee Child, Lisa Gardner, Catherine Coulter, R.L. Stine, Ann Rule, and more. Q&A interviews of the biggest authors are always good. I’m getting the tape for Lee Child’s presentation because I was late and it was standing room only! For a full list of the presenters and schedule, check the website.

Then there’s me, personally. At other events, I feel like I have to be “on” at all times. Meaning, I need to be attentive, pay attention to everyone around me, be cheerful, talkative, helpful, and friendly. I had a very bad experience at one RWA conference that cut deeply and every time I walk into another, I have a sense of panic. It’s not overwhelming, but it makes me want to stay in my room when I have no place to be. I know, as Karin would say I need to grow-up and get over it, but it’s one of those things I haven’t been able to completely forget. Hey, I still go to big conferences! 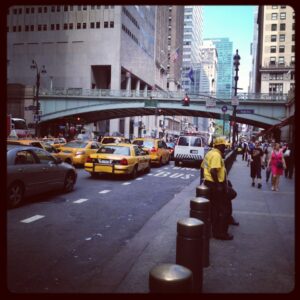 Pershing Square, right outside the Grand Hyatt Hotel. Remember the climax of THE AVENGERS??? Yes, it was here! Love that movie. 🙂

Now, Thrillerfest isn’t perfect. My single biggest complaint is the lack of a public signing. The current signing schedule is ridiculous and modeled, I believe, after other mystery conferences. There was going to be a public signing this year, but they didn’t have enough time for the logistics. I have some ideas on this and am writing a memo to the Board on how I think it can (and should!) be implemented. Also, sometimes the panels are so people heavy that there’s not a lot of depth in 50 minutes. I think four panelists and a moderator works; six panelists, not so much.

I wish I could better articulate why this conference fills me in ways that other conferences have not. As a career-builder, I think no conference truly has an impact, but this one comes close in terms of refilling the writing well and making connections with people who truly seem to want to support the writing careers of authors both new, midlist, and established. Another plus is that published authors don’t pay dues (because of the anthologies we publish that keep us solvent.) Thrillerfest is also as much a READERS conference as a WRITERS conference, and has a track of panels just for the thriller reader, plus cocktail parties, morning coffees, and more that allow everyone to mingle. I have so much more to tell, but this blog is already getting too long! 🙂

Here’s one other benefit: Entertainment at the Thriller Awards Banquet. In the past, Michael Palmer and Daniel Palmer have entertained us with an original song; this year Brad Parks stepped in to fill Michael’s big, talented shoes. (As an aside, both father and son Palmer are fun, funny, and generous with their time and talent.) This year, we have Ghost Writers in the Sky — absolutely fabulous! Enjoy 🙂 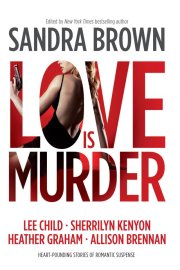 ITW supports itself through the publications that are donated by members. Sandra Brown (talented, gorgeous, gracious and kind) edited LOVE IS MURDER, our romantic suspense anthology, which got two starred reviews and contains 29 fabulous short stories, including some for current and former MSW bloggers (myself, Laura, Rocki, Toni, Lori and Deb!) I’m giving away one copy, digital or hardcover, of this anthology to a lucky commenter.