Yes, I’m being tongue-in-cheek with my title because I’m writing today about adjectives and adverbs.

On Twitter, the fabulous Manda Collins — a historical romance writer who I know and love — posted something that at first made me laugh, then made me cringe. Under the caption “This is terrible advice” she posted a screenshot of, well, some terrible advice. I’ve removed the advice-givers name — partly because I don’t think anyone should be personally attacked for their opinion (and I don’t want her to get hate mail!) but also partly because she removed the post. However, because I have heard this so-called advice, and the original post was posted by an agent, I thought I would blog about it. 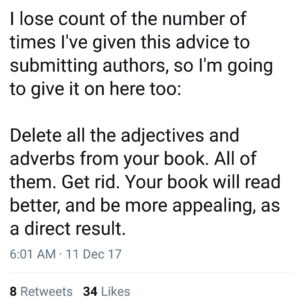 I’ll be the first to tell you that I’m not a grammar expert. I love my copyeditor because (usually) he/she will fix my errors. So I’m not giving you a grammar lesson here, I’m giving you an author’s perspective as both a storyteller and a reader. Let’s look at what adverbs and adjectives really are.

ADVERB: a word or phrase that modifies or qualifies an adjective, verb, or other adverb or a word group, expressing a relation of place, time, circumstance, manner, cause, degree, etc. (e.g., gently, quite, then, there ).

ADJECTIVE: a word or phrase naming an attribute, added to or grammatically related to a noun to modify or describe it.

I learn by example, so I’m going to give some examples.

In the screenshot above, “submitting” describes the type of author she’s talking to, therefore is an adjective. I suppose you could argue that “submitting author” is the entire noun, but I think it’s an adjective.

“Direct” describes “result.” She could have said “As a result” and that would have given us the same information, but she wanted to be emphatic, to show that by taking this advice, you’ll see a direct (i.e. clear, immediate) result. Not a result that might take weeks or years to see (such as the result of a meandering river cutting through a mountain.)

I understand what this agent wants to share with aspiring authors: she likely sees thousands of submissions every year written by unedited and unprofessional writers who think every line of dialogue needs a tag, and with that tag why not attach an adverb or two? Or writers who over-describe the weather (I woke up this morning to frost. A cold, frigid, numbing winter morning.) Yeah, people (including me) overuse adjectives. That’s why I am ruthless in self-editing, and why I love my editor and copyeditor.

How we write is our style–our author voice. The descriptors we choose, how we use them in a sentence, how we show character and setting, is all part of our authorial style. If we remove all adjectives and adverbs we will all write exactly the same way. Noun verb. Noun verb. Sally ran to the park. She slid on the slide. She fell. The sand hurt her butt.

It wouldn’t kill her.

Eyebrows knit together beneath a cap, Lieutenant Eve Dallas strode through the people on the sidewalk with thoughts as bitter as the February wind.

She’d rather be back in her vehicle and driving home through the jam of other vehicles. , she’d rather engage in mortal combat in some alleyway with a chemi-head than head for some bar.

But a deal was a deal, and she’d run out of excuses–reasons, she self-corrected. She’d had reasons to put this deal off.

Take away the adverbs and adjectives of this opening, and it’s dry and dull and loses the voice of Eve Dallas. (Don’t yell at me if I missed a few! Again, I’m not a grammarian.)

The girl woke up the way she’d been trained: . She inhaled , a gasp in the night, then her eyes fixed on her mother’s face.

The girl threw back her covers and sat up. The night was cold; she could see her breath as a mist in the moonlight. The little girl was prepared, . She and her sister slept dressed, layering T-shirts, sweatshirts, and coats regardless of the season. You never knew when They might come, flushing their prey from sanctuary into the wild. children would fail , succumbing to exposure, dehydration, fear.

In the above example, the adjectives and adverbs give you details you need to really connect with the young girl who is the viewpoint character. You need to know that she’s little (young); that she has an older sister (not simply a sister); that through her mother’s “drawn” face, you sense that her mother is tired and fearful. Some of the adjectives set the scene (frosty, glowing, treacherous) which is instrumental in getting us, as readers, into the scene. Without them? the scene is interesting, but falls flat. And some of the descriptors are needed for clarity, such as “unprepared children” — she’s describing the children that the viewpoint character fears, because being unprepared means you will fail.

Another thing I should point out are adverbial phrases and the like — but I really don’t have a strong grasp on how to describe them. Basically, dependent phrases that describe how someone is doing something or describing an object. My high school English teacher is going to kill me. (Sorry Mr. Kubiak! It’s been — cough cough — 30+ years!)

In a town, the opening of a store is news.

It wasn’t as big a deal to Brian Rusk as it was to some; his mother, for instance. He had heard her discussing it (he wasn’t supposed to call it gossiping, she had told him, because gossiping was a habit and she didn’t do it) on the telephone with her friend, Myra Evans, over the last month or so. The workmen had arrived at the building which had last housed Western Maine Realty and Insurance the time school let in again, and they had been at work ever since. Not that anyone had much idea what they were up to in there; their act had been to put in a display window, and their had been to soap it .

Whenever you hear advice that seems to be all or nothing — do this ALWAYS, don’t do that EVER — be skeptical. Stephen King says that the road to hell is paved with adverbs — but trust me when I say, he writes them on occasion. Why? Because sometimes, an adverb is the best way to convey the exact feeling or thought you want your reader to have.

Advice like the above — delete all adjectives and adverbs — is born out of frustration. I remember reading an unpublished 25 pages or so in the Kiss of Death contest years ago. The author used every dialogue tag on the planet … except for the tag I use 95% of the time: “said.” It was as if she’d listened to someone’s advice about repeating words (generally good advice — I cut echoes multiple times in the page proofs for BREAKING POINT) and applied the advice everywhere. But “said” is unique — it disappears to the reader. My advice? Don’t tag except to avoid confusion for the reader. Use action tags when appropriate, and “said” to keep clarity so the reader doesn’t lose who’s talking. If you use something other than “said” (and the occasional “asked” or “whispered”) it will stand out — so use it only when you want the tag to stand out. And while avoiding adverbs in dialogue tags is generally good advice, sometimes you want that added umph!

I am the last person to give grammar advice — but I know about telling stories. And if you strip all your adverbs and adjectives out of your story, you’ll lose both style and voice. That said, when you edit, be ruthless. Consider stronger verbs, and making one good adjective do the work of three. Editing is your friend. And so are all the parts of speech.