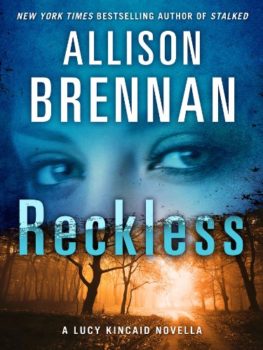 FBI trainee Lucy Kincaid’s spontaneous weekend camping trip with her boyfriend, P.I. Sean Rogan, turns into a deadly nightmare when they come across two hikers looking for their lost son. But when Lucy and Sean split up to help find the missing child, each quickly realizes that the parents have a dark secret they’ll kill to keep. Don’t miss Reckless, a thrilling novella from bestselling author Allison Brennan.

Two voices echoed through the trees. Clearly they were arguing, but Lucy couldn’t make out what they were saying. Sean swore under his breath. Lucy felt bad for him because he had this weekend planned for the two of them, and now in his eyes it was less than perfect.

She said, “When we’re done eating, we’ll secure the food and take a walk. Maybe if they know we’re also camping here, they’ll tone it down.”

Sean glared at the woods as if silently cursing them.

After they cleaned up, they walked east, in the direction of the voices. They no longer heard anyone arguing or even talking, but it was better to take care of the situation now. Maybe Sean was right and the couple was simply hiking for the day. Maybe they were lost and Sean could direct them back to where they needed to go.

They trekked through a section of birch trees that went for as far as Lucy could see. “Are you sure you’re going toward the lake?” she asked.

Sean glanced over his shoulder. “You doubt my sense of direction?”

He held up his tablet. “Even if I didn’t have this, I know where we are, okay?”

“Sorry for doubting you.”

Lucy laughed. Sean turned left and a few feet later Lucy saw the lake through the trees. She crossed her heart. “I’ll never doubt you again.”

He reached over and tickled her. “See that you don’t.”

They walked along the edge of the lake, which was rocky and strewn with old, rotting branches and logs. Several pairs of geese were out swimming. One stuck his long neck under the water and, as Lucy watched, came up with a fish. From the north, six geese flew overhead, circled, and landed smoothly in the middle of the lake.

Lucy whispered, as if speaking too loudly would break the magic of the moment, “We should come back here before sunset. It’s really lovely. Peaceful.”

Sean nodded and gestured to a grouping of rocks about twenty feet high. “We’ll climb up there. Good view.”

She took his hand and kissed it. The spontaneous display of affection surprised both her and Sean. Lucy was acutely aware that Sean was the more romantic of the two of them. She appreciated it more than she could ever explain to him. He gave her not only what she wanted, but also what she needed. Things she needed that she could never ask for from anyone, he gave freely.

They walked around the rock formation and saw the campsite. It was a small camp, similar to Sean and Lucy’s space with an old fire pit in the middle of a clearing. Instead of a tent, there was a small lean-to. A couple of backpacks and a rifle leaned against a tree next to the makeshift shelter.

The couple wasn’t there, but their voices were close by. They were arguing again with an urgency that bordered on panic.

Lucy glanced at Sean. He’d heard the same thing, but he’d gone from curious to protective. He didn’t like the tone any more than she did.

The woman stepped into the clearing and saw them. She pulled a gun from her pocket and turned it toward Lucy and Sean. “Who the hell are you?”