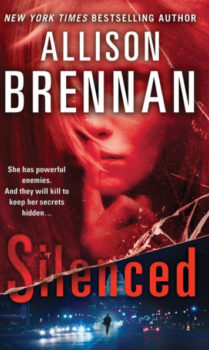 It has been seven years since Lucy was attacked—and almost killed—by an online predator. Today, she is well on her way toward a new life. While waiting to begin her training at the FBI Academy, Lucy’s is tireless in her fight against cyber sex crime. Her current mission: to find out who killed a high-priced call girl linked to a powerful Congressman.

A number of known prostitutes—with scores of high profile clients—are turning up dead all over D.C. Is this the work of a depraved killer? Or the result of an inside job? Lucy’s investigation will take her into an underground network of prostitutes, the chambers of the country’s most powerful players, and her own dark past to confront an unknown enemy who’s always one step ahead of her. With the help of her P.I. boyfriend Sean Rogan, Lucy must find and protect the only witness who can identify the killer and end the conspiracy, but can the witness be trusted? Lucy will risk everything to expose the truth and ensure justice is served, even if that means putting herself in the line of fire…

The whore traitor lived in a secure building with live cameras and nosy neighbors. Brian had to wait for her to leave.

Waiting made him antsy. He just wanted to get this job over and done. He didn’t hate the whore. In fact, he had no feelings about her at all. But she’d crossed the line from useful to problem, and problems must be solved.

Two hours of waiting—sitting on the park bench in the heat pretending to read a book—while watching the main entrance of the condo. He’d watched her often enough in the last three weeks to know her habits. How she left every morning before ten to run in the park. How she took the Metro to visit her johns in whatever five-star hotel she’d chosen for the night. How she’d lied about what she knew and when she knew it.

Washington DC sex scandals were a dime a dozen: affairs with interns, sexy mistresses, even a few cougar congresswomen with stables of young studs to service them on the side. But selling sex was still taboo, and could take down an elected official as fast as twittering birds would tweet.

She’d lied to protect her ass, but now she couldn’t be trusted. All she had to do was keep her fucking mouth shut while they figured out who had leaked her relationship with Crowley to the press. If the truth came out, everyone would be on the hot seat. But now she was talking to the wrong people and her lies were coming full circle.

The whys didn’t much interest Brian. He was a man of action and opportunity, not a man who pondered motive or psychology.

Brian stood and stretched. It was appropriate behavior, considering he was wearing running shorts and a T-shirt.

The cathedral bells chimed in the distance. Soon it would be too hot for her morning run. Unexpected changes in routine were never good.

He bent over and touched his shins, stretching his hamstrings. Sweat stained his underarms. He disliked the smell of body odor, even his own. At this point, all he wanted was to kill the bitch and take a shower.

As the final bell rang the tenth hour, he stood and saw Wendy at the corner, jogging in place, waiting for the light to change. Well, shit, he’d almost missed her, even in her bright pink shorts and white T-shirt with one of those pink ribbons on the back. But her attire would make her easy to spot from a distance.

He called his brother. “I see her. You’re clear.”

“Right back at you.” Brian disconnected, irritated that Ned thought he’d screw up. Ned was the crazy one, not Brian. Ned had a record, not Brian. But just because Ned had a college degree and pretty face, everyone thought he was smarter.

The light changed and Wendy jogged across the street, into the park, and up the path that she always ran.

Brian kept his distance. Because it was a weekday and edging toward ninety degrees, the trails weren’t crowded. There were a few people running or walking, and the rushing businessmen with those idiotic earpieces, talking as if no one else could hear them.

He’d followed her several times over the last year, important when in business with someone who lied for a living, and so far she’d run the same five-mile route nearly every day. He cut through a narrow patch of trees and trekked up a short, steep embankment so he could cut her off.

At the top, he looked at his watch. It would take her another three to four minutes to reach this spot. Brian stretched and focused on catching his breath after climbing the slope. Just another runner trying to beat the heat. He tilted his head in greeting at a male who jogged past him wearing a million-dollar running suit. The guy passed Brian without acknowledgment. Asshole.

Brian spotted the bright pink shorts as Wendy turned a corner. She’d be winded by now, over three miles into her run. He waited until she was thirty feet away, then ran in the same direction at a slower pace. Don’t make her nervous. Don’t make her think he’s a threat.

A pulse of adrenaline flooded his system. For him, killing was a means to an end, and he never felt more than an initial fear and thrill. But this pulse, this vibration of danger, excited him.

That excitement made it hard to slow down, but he did, letting Wendy run past. She had one ear bud in, one out, classic style of serious runners. He pulled latex gloves from his pocket. Twenty yards ahead the path curved to the left before starting the descent back to the main park. He glanced behind him. A pair of women approached, fast-walking while they chatted. He had one chance.

As soon as Wendy rounded the curve, Brian sprinted and tackled her like a linebacker. She went down hard, opening her mouth to scream, but he’d knocked the wind out of her. She flailed for something in her pockets. He searched her, found a container of Mace on her key chain, and tossed it away.

She gasped for air, and he punched her in the face. He took no pleasure in hitting the woman, he simply needed her silent.

He jumped up and dragged her into the thick shrubs. He rolled her onto her stomach, held his hand over her mouth, and pinned her with his body until the two women were beyond earshot.

His brother had told him to fuck her, then kill her, so her murder would look random, but the fear of getting caught made his cock shrivel.

The longer this job took, the more likely he’d be seen. He didn’t even have the dark of night to hide him.

She fought back, surprisingly strong for a little thing. But he had eight inches and eighty pounds on the bitch. It was almost worth taking his time, to see how long it took her to wear herself out.

But of course he didn’t, because there could be any number of people coming up the path.

Brian sat on her ass and wrapped his gloved hands around her neck. Squeezed. He didn’t need to look at her, didn’t particularly want to, while she died. Her being on her stomach made his job much easier. She couldn’t kick him. She tried to scratch him, but couldn’t reach back far enough. Her death didn’t take long at all, but he kept his hold on her neck for another minute just to make sure.

He was about to get up when he heard a group of runners pounding the trail, kicking up dirt. He waited, lying on top of dead Wendy. He’d picked a good spot for the kill—if he couldn’t see any passersby, they couldn’t see him. His nerves were on edge. The overwhelming fear of exposure making him want to bolt, but he forced himself to wait.

When he was certain the group was gone, he rolled off her body, disgusted by touching the dead thing. He was about jump back onto the path when his brother’s words came back to him.

He stared at Wendy’s body. No fucking way he could rape it. He didn’t even want to be this close to her, not anymore.

But he didn’t have to rape her, right? Just make it look like rape.

He pulled down her shorts and panties, then spread her legs as far as they’d go. She’d hate being found dead like this. How else could he embarrass her?

He looked around, trying to come up with an idea. Then an idea struck him. He grabbed the pen and wrote on her bare ass, chuckling quietly at his own humor.

Brian was back on the trail less than two minutes later. When he was far enough away, he called his brother. “It’s done.”

“We have another problem,” Ned said. “But I’ll take care of it tonight.”

Ned hung up, leaving Brian with no idea what problem Ned had uncovered.